The C64 extensions are modules/plugins to add special features to the C64 emulator. This extensions are packed together in one installer and can be downloaded here.

To activate an extension just click to the icons on your desktop or execute the c64.exe with the argument --plugin folllowed by the extension name or select the extension in the Configuration - Extended - Extension Dll

With the video extension you are able to save a video file during playing or working with the emulator. Just activate the video recording by pressing the insert key.

I tried also to run the emulator in a web server environment as CGI to play a snapshot file in the emulation and transfer the video to the web client (Firefox). Here are the CGI calling arguments: c64_cgi.exe --no-output --plugin C64_plugin_video.dll --stream-video --stream-audio

With the GIF extension you are able to save a gif animation file during playing or working with the emulator. Just activate the recording by pressing the insert key.

The user is able to develop extensions with the TScript engine (TScriptDll.dll).

Debug your C64 programs include viewing assembler statements and memory. 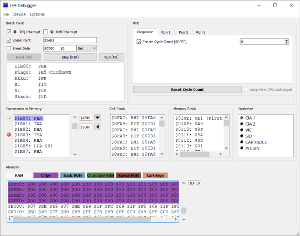 This is more a technical study and for fun. The extension simulates a multi-bank cartridge with an included asm program on it, which will be copy itself into the ram after execution. The program always switch to the next bank of the cartridge and copies the buffer into screen ram. The extension provides a single picture from the camera input, every time the bank selection changes. That means you can see a very simple video of the camera input.

This is the beta version of an ESP8266 and an user-port RS232 modem. This extension provides the two modems, a web configuration, a REU Ram extension and an interface to provide the data transfer. The data transfer can be done through a TCP network server or an executable file (in-out pipes).

See the interface header (written in C) for details.

Additional there is a "C64_Extension_Interface.chm" help file available in the C64 program folder after installing the C64 Emulator.

Again some improvements for all platforms. The C64 JavaScript Emulator will be provided as WebAssembly from now on.

The new Raspberry 4 is available and here my new C64 Emulator Version.

Have a look in the new C64 SID Music Corner.

New multiplayer network mode for the C64 Emulator on Windows, Raspberry and Android. Play together on different devices.

Couldn't resist: I would like to present my new C64 Emulator Android App.

A new version of the JavaScript Emulator is available. Enhanced mobile support and file drop.

The first version of the C64 Emulator for the Raspberry PI.

A new year and some new improvements.

One of my biggest goals are reached: The accurate emulation of IK+

The C64 Emulator is now direct executable in the browser.